In this fishing tournament, first place could mean a $1-million payday 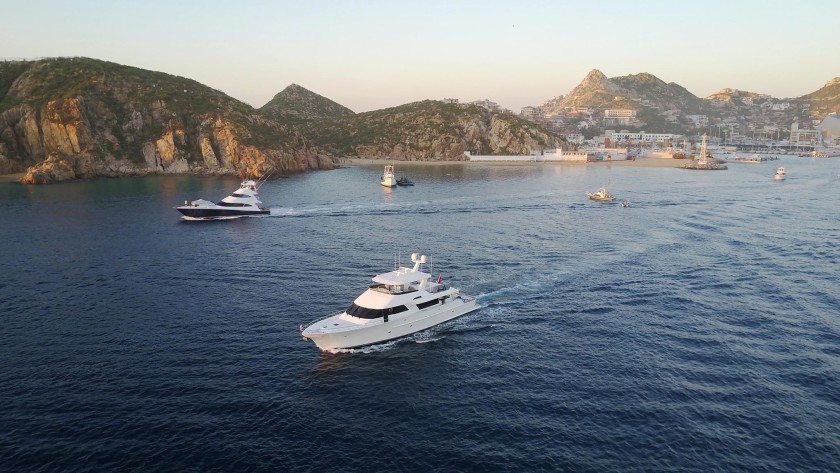 As the crew of the Stella June dug into plates of Asian fusion at the Chubby Noodle on sleepy Paseo de la Marina, captain Evan Salvay ran his fingers through hair shaped by a day’s worth of saltwater, wind, broiling sun and spiking anxiety.

The 27-year-old Salvay had ridden both sides of the exhilarating and sometimes cruel waves at the Bisbee’s Black and Blue marlin tournament, the richest sport-fishing chase on the planet. A year ago, a fish landed by the part-time Point Loma and Huntington Beach resident translated to just more than $3 million.

Two years ago, a potential $1-million catch was edged out by a fish 14 pounds heavier and the paycheck plummeted to $7,020.

The estimated payout for this day’s biggest catch: $1.23 million. The Stella June had caught a 466-pound black marlin that held up as the day’s best for hours on end. But 2½ blocks away, a boat neared the dock with the only remaining fish left to weigh.

For three days each October, it transforms Los Cabos into Las Vegas on water — boasting a record $4,591,950 in prize money this year, dangled at the end of fishing lines extending from 126 boats.

The minuscule margins of error can cause tempers to rise. One year, a boat angled behind another and cut off the lures being used to coax a rare check-cashing marlin from the depths. When the teams met at the docks, the fists were about to fly.

Wayne Bisbee, Bob’s son, recalled that the offending captain invited the competition onto his boat to choose lures as a peace offering. “The next day, one of those lures won the tournament,” he said.

Another year, participants refused to abandon the beachside awards dinner when a storm tide rushed in, continuing to drink at tables with legs submerged. There was a downtown bar crawl aboard local firetrucks as organizers flung beads Mardi Gras-style. Last year, a Louisiana captain ran up a $6,000 bar bill.

It’s also the ultimate event of sport fishing for hundreds who stalk the hulking marlin patrolling one of the richest biospheres on earth. The average release rate in the tournament — a fish must weigh at least 300 pounds to qualify — routinely hovers around 98%. That begins to frame the math and dizzying odds of landing a shot at millions.

Salvay and the Stella June had such a fish. What they didn’t know, as the sun darted toward the western horizon and the smell of Korean pork tacos wafted through the room, was how big, or small, their check would be. A phone buzzed as a text message rolled in. A boat named True Grit was bringing the day’s last marlin to the weigh station. The crew bounced up from the table and raced toward answers.

Salvay slipped off to his hotel room.

“I’m not going to sit down there and stare at it. It is what it is,” Salvay later explained about the tense moment on Oct. 24. “The future has already been written.”

Each team paid a $5,000 base entry, but that only sniffed at the real financial investment. To win big money — and dozens of boats glide into the marina for just that — the gutsiest jumped at a range of jackpot buy-ins to become eligible for million-dollar paydays.

For context: The prize for the biggest fish paid nearly $108,000, while the most collective weight translated to $61,500. The money that caused 51 teams to salivate, though, was funneled into three daily jackpots costing $30,000 in total for each team.

For the first time, those daily jackpots paid out more than $1 million daily. In the previous 38 tournaments, no more than one $1 million-plus check had been earned in a single year.

Teams can contribute to various jackpots, and going “across the board” — entering all the mainstream categories — cost $71,500.

The week before in the Los Cabos Offshore, another Bisbee tournament, one boat snagged nearly $445,000 for a 328-pound blue marlin because it entered the right jackpots. The tournament’s overall winner, which brought in a 468-pound black marlin, collected much less ($89,530).

At 7:45 a.m. each day, boats huddled behind an imaginary start line that extended from Cabo’s endlessly photographed Arch past a double-decker start boat with flare guns. They fished anywhere within a 40-mile radius of Cabo, with options in both the Sea of Cortez and the Pacific. Lines had to be out of the water by 5 p.m., and teams had until 9 p.m. to weigh in.

Teams had to report by radio the time, species and location of the fish hooked. Since 2000, the tournament has required a member of teams that cash checks to undergo a polygraph test. Just two have failed, Wayne Bisbee said.

Anglers flood in from around the globe. Organizers estimate a combined 10% routinely compete on teams from Japan and former Soviet republics. The sport’s best captains and crews rush to Cabo as well.

“If you went down to the Great Barrier Reef to fish, don’t even bother,” Wayne Bisbee said. “Any Australian crew worth their salt, who’ve caught anything, they’re hired guns here. Same with Kona in Hawaii. Don’t go to Kona this week. Any captain worth a damn is here.”

The frenzied daily competition started at 8 a.m., spiked with adrenaline before a line hit the water. Think of a Formula One race in Europe, where cars go from stationary to top speed in a blink, zigzagging for valuable position. At the Bisbee’s, the “cars” come in different sizes with wildly varying horsepower.

Some boats eclipsed 40 knots, nearing 50 mph, as they bolted for the boundless blue. Others found themselves rocking in the overlapping wakes like a tennis shoe in a washing machine.

Earlier, anglers had shared a video from a tournament immediately before the most recent Bisbee’s that showed a boat cutting behind a competitor at high speed. The anchor-holding pulpit extending from the bow completely crossed over the neighboring stern. If anyone had been on the stern, the consequences could have been catastrophic.

Trouble has sometimes found boats and crews immediately. A decade ago, just minutes after the start, tournament officials raced to rescue the crew aboard Bottom Line as it caught fire and sank before anyone could retrieve passports, wallets or other belongings. Another time, a classic, custom-made boat lost a plank in its hull and gulped water as it sped up. It was gone in minutes.

“And believe it or not, it was the same captain who was on the boat that burned,” Wayne Bisbee said.

Mike Kusler, the owner of Kusler Yachts at Kona Kai Marina in Hawaii, fished his first Bisbee’s aboard a 70-foot Hatteras named Resilient. They released a blue marlin, but Kusler was hooked by the spectacle.

“Just seeing all that fiberglass at the lineup for the shotgun, seeing all the money caught up in boats, I was awestruck,” he said. “There’s hundreds of millions of dollars on that start line. This is the mecca of our industry.”

Among contenders, the Stella June — a 45-foot SeaHunter — proved the most unusual. The open-air center console lacks the cushy, climate-controlled salons available on most top boats. The Stella June offered just a sliver of shade, so the team dipped towels in icy water to drape around necks. They converted a bucket into a makeshift bathroom.

They cranked rap to buoy spirits as they fished with 5-pound skipjacks. The team competed without a fighting chair, a stern-end staple for elite participants who maximize the leverage and support the chair provides. Aboard the Stella June, the 466-pounder was fought in a stand-up harness by Jazz Moorhead of Costa Mesa and Ryan Griffin of Newport Beach.

On Day 2 of the competition, Griffin — who routinely tracks monster marlin in Kona — saw an owl spying on the crew as the group made the predawn walk to the marina.

“We’re competing against 120-something boats and the best fishermen in the world, hands down,” said Griffin, 34. “This can be life-changing. I saw that owl majestically fly off and said, ‘In Hawaii, that’s really good luck.’ ”

It was. That’s the day they reeled in their contender.

At 1:32 p.m., they collected just one of five black marlin caught that day and one of just two potential contenders they landed in the tournament for owner and angler Ivan Vanortwick, who made his money through Jungle Boys, a cannabis collective in Los Angeles. They tugged on the giant fish for 121 minutes.

But at the Bisbee’s, failure roundly trumps triumph.

“It’s emotional,” Grodske, of the C Bandit II, said of losing a fish. “There’s an adrenaline rush, then that moment of disappointment. But that can’t cause you to make a bad pitch [like in baseball]. You can’t let it unhinge you. The fish has to win some too.”

During October’s three-day tournament, 175 black and blue marlin were caught. Only nine qualified after 3,402 hours of collective fishing.

As the True Grit brought in the final fish, Stella June crew members raced down an empty alley leading to the bustling marina. Griffin, Moorhead and Seth Dubois of Orange wiggled into a weigh station mosh pit packed with fishermen, confused tourists and locals.

A day earlier, a marlin of the identical weight — 466 pounds — earned $1.75 million. Salvay tried to explain the head-shaking odds of two check-chasing marlins being, for tournament purposes, the same. “The difference is ounces that are not distinguishable on the scale,” he said.

As True Grit’s fish was raised to determine its financial worth, no one among the sweaty mass realized the identities of the three men from Stella June — or what was at stake as they jostled among them.

Wayne Bisbee grabbed a microphone to bark out their fate.

Salvay had played all the angles. Plied the right water. Enticed the right bite. Now, in his hotel room, he just had to wait.

Was his lottery ticket waiting? For an unprecedented second time? Two years in a row?

The nearly $1.3 million became $11,070 for ultimately finishing fourth in the tournament. The three teams in front of them joined the millionaire club. An additional $24,625 in tournament and captain’s prizes melted away by finishing one spot too low.

“I got a text and said, ‘All right, I’m going to bed,’ ” said Salvay, detailing how he processed the jarring news.

“It hurts a little bit, for sure. But you wake up the next morning, you sleep it off and you put it in perspective.”

Some of the Stella June’s crew had termed the potential to earn six-figure paydays “life-changing.” But they shed the dreaded news with grace. At the awards banquet, they smiled, back-slapped and acted as if they were about to celebrate a big payday. The salve? Another tournament was 363 days away.

“When you come down here to essentially the Super Bowl of fishing and weigh in a fish and get a podium finish, get a little trophy, get a little check, it’s really about the experience,” Salvay said.

It ain't over till it's over.