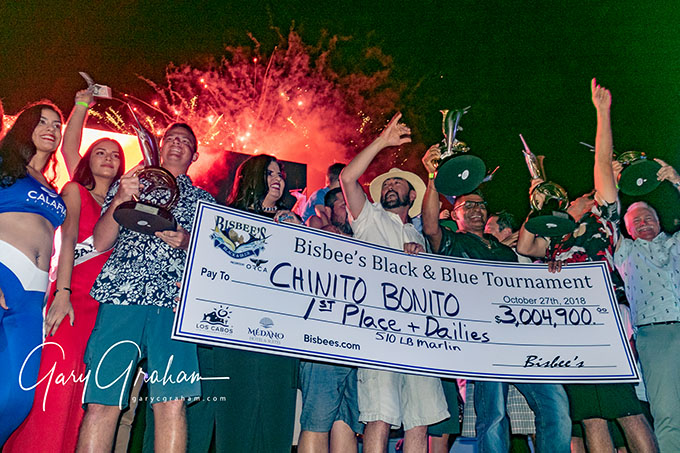 CABO SAN LUCAS, BCS, Mexico – A 510-pound black marlin on the final day of the Bisbee Black & Blue Tournament was worth a staggering $3,004,900 to angler Charlie Lee and California-based Team Chinito Bonito.

Lee, from San Diego, is no stranger to prize fish; in a previous year he took home $7,020, a far cry from this tournament’s $3,004,900. The second largest payout in the history on Big Game Sportfishing Tournaments.

The 2018 event had 114 teams competing in the waters off the tip of Mexico’s Baja California both in the Pacific Ocean and Sea of Cortez.  Earlier, rough and roiled seas as a result of Hurricane Willa made things difficult for the anglers, but on the final day the water flattened and skies turned blue.

It took Lee and the Chinito Bonito Team 1 hour, 37 minutes to boat the marlin.  After landing the giant black, they headed back to the weigh-in station where their prize catch was confirmed as team members celebrated.