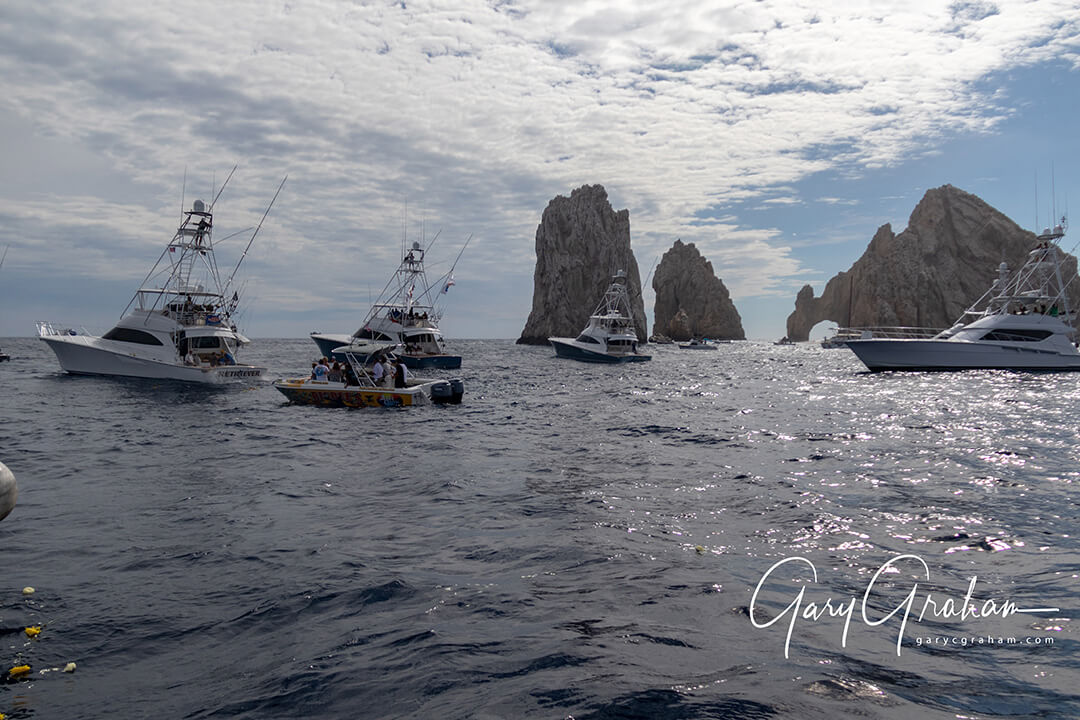 Bob Bisbee Sr., patriarch of the Bisbee’s Black & Blue Tournaments phenomena, peacefully passed away June 14, 2018 in the north Dallas Metroplex, leaving behind a legacy, a loving family and a huge circle of friends.

Because his influence and friendships spread throughout the world, his family felt that the most appropriate way for everyone who wished to say good-bye would be at a celebration of his long and productive life in Cabo in October. Several hundred of Baja Legend Bisbee’s family members and friends, including the love of his life, Aina, whose marriage had spanned 58 years, gathered at the Baja Cantina on Monday, October 22 to honor him.

The overflow crowd of family, and life-long friends, some of whom had never before visited Cabo San Lucas, joined newer friends, and others who hadn’t met him, but had been touched by his kindness and who wished to pay their respects to the man and his accomplishments.

After the Hank Williams Sr. music – which was often played on his fuel dock back in Newport, Calif. in the “old days” was silenced – his son Wayne Bisbee began speaking.

“Thank you all for taking the time to attend our informal tribute that we believe that dad would have wanted.  Speaking for the family, I would like to  welcome everyone. Dad would not have wanted to be remembered by his death, but rather by the man he was in life.  My dad was a God-fearing man who used to say that God will understand that when you ‘gotta work, you gotta work … even on Sunday.’” Wayne continued, briefly outlining the afternoon’s schedule before introducing one of the local clergymen, Pastor Mike.

The minister shared that although he had met Bob Bisbee, he didn’t know him well. He understood that he was a generous man who made everyone around him feel special; he had an unusual talent for memorizing their names. Being a man of great wit, he used “one-liners,” often.

Friend Argyle Nelson commented, “Bob was such a great boss and friend. I am still using his witty sayings to this day. My thoughts and prayers go out to the Bisbee Family.”

Then, expressing his appreciation for being invited to be part of the awesome celebration, Pastor Mike closed with the Lord’s Prayer.

Bobby Bisbee thanked everyone for coming, adding how much Bob, Sr. had loved Cabo San Lucas, as well as Baja and its people. “Bob introduced Baja’s big game sportfishing to the world and I would like everyone to honor him with one minute of applause,” suggested Marcos Ehrenberg.  And the crowd responded!

As I walked around the room, I listened to comments from friends and family who had known Bob at different stages of his life.  Some of the words that were repeated were “problem solver,” “tenacity,” and “ability to close a deal.”  But what really caught my attention was the group that were discussing his leadership qualities, saying that Bob had the ability to earn the respect of those he worked with … starting out at the bottom and coming out on top.

Back in 1982, Bob and five buddies had pulled off the first tournament, an idea which became a reality, that changed his life forever. They all began kinda’ a posse and kept it going in the early years -- the first Black & Blue Marlin Tournament had six teams and a purse of $10,000.

Bob’s success and tenacity was underscored last week by the Los Cabos Offshore Championship held Friday and Saturday that set a record number of boats for the event with 123 entrants; plus it was the 8th Tournament in the world to have a payout of over a Million Dollars at $1.165 million which was distributed to eight teams.

Throughout the afternoon, memories and stories were exchanged until it was time for friends to board the Cabo Wave while close family members were loaded on the Bisbee Skiff.

The procession then slowly headed out to the outer bay in front of Land’s End and the Arch. There, they were joined by more than 25 boats ranging from 20-to more than 80-feet. Everyone watched as Aina and Bobby Bisbee spread the family patriarch’s ashes in the outer harbor in the shadow of the Arches at Land’s End.

Bob is survived by his wife Aina, children Debbie, Bob Jr., Wayne, Tricia, Erik and Destiney, many grandchildren and great-grandchildren. He also leaves his sister June and brothers Larry, Gary, George, and Bruce.