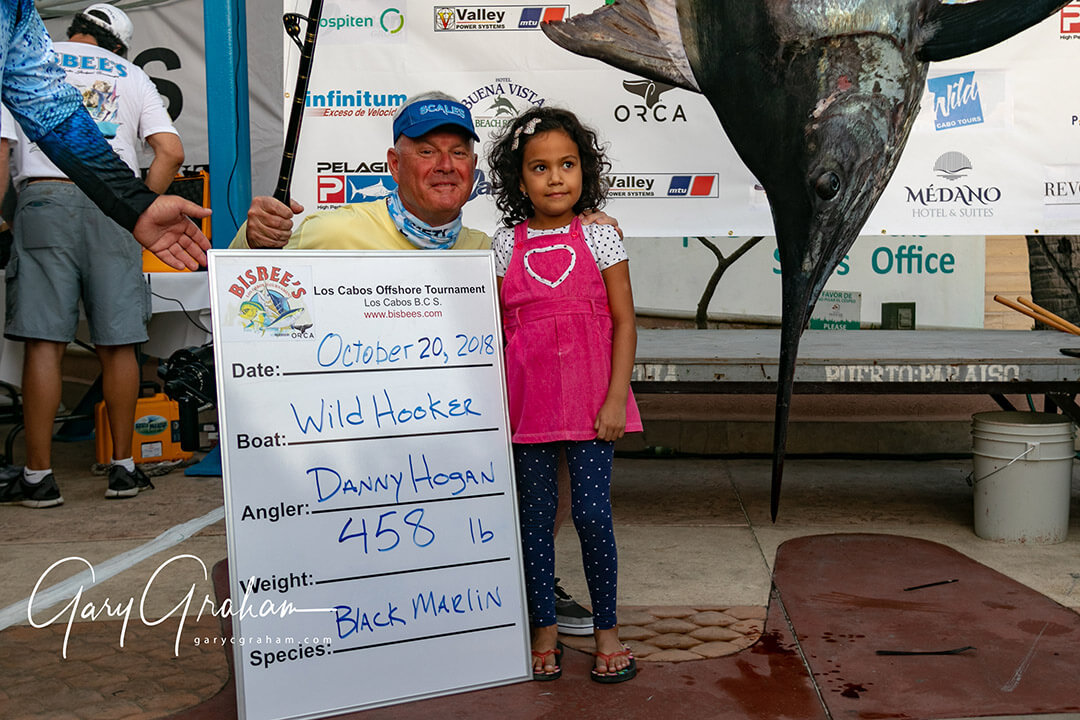 What a difference a day makes.

Despite ideal weather on Day One, the Bisbee’s Los Cabos Offshore Tournament was more about looking than hooking for most of the teams whether fishing the Pacific or the Sea of Cortez.

Storms were churning around way to the south on the second day, but the weather in the fishing grids remained nice. After a busy day that kept the staff hopping from the time the weigh station opened at 3 p.m. until it closed at 9  Saturday night, the number of qualifying fish landed and brought to the scale increased impressively – for all categories except the Dorado Division which remained unclaimed.

Spectators gathered quickly to gawk at the black marlin draped over the edges of the swim-step of the Edith III, a 33-foot Crystaliner at the IGY Dock.  A posse of dock workers wrestled the big marlin onto a cart and marched it down the malecon with a parade of mid-day strollers parting before them.

When hoisted, it was 455 pounds, placing the team in an early lead for the largest billfish of Day Two. Duran said that they had caught it on a live skipjack on a downrigger. It took the bait and spit it, only to return and swallow the bait whole on the second try. The battle lasted 1 hour, 25 minutes before it was loaded on the swim step.

The next visitor to the scale was fishing the LCO for the first time. And to mix things up, Team Bill Collector’s Canadian angler Haddon Barnes, arrived with a 43.3-pound yellowfin tuna, putting his team at the top of the tuna leader board.

Barnes was followed by Team Knot Working’s angler, Chad Carter, aboard the Knot Working from Central Florida, who weighed in a 147-pound yellowfin tuna. Mike Timon, owner, cleverly adding that “We had been playing -- “Knot Working.” Timon continued, “We’ve been in this position many times and get knocked off by a few pounds. We lost one yesterday twice this size.”

And sure enough, his statement proved prophetic, as the next YFT caught on the boat Overtime by Ryan Moser, Denver, Colorado, of Team Overtime weighed 235-pounds when brought to the scales, placing them at the head of the pack. Moser proudly declared that it had been caught on a Crane trolling lure – one of his favorites.

However, there were more tuna on the way to the scales that could change the day’s outcome.

The Wild Hooker arrived next with veteran angler Danny Hogan who placed in a Bisbee Tournament last year. As his fish was being hoisted to be weighed, team member Allen Stuart murmured as he eyed the fish, “Now I know what it’s like to be in Third Place.”

When Hogan’s black marlin tipped the scale at 458 pounds, the Team Wild Hooker roared approval.  They were in fact in First Place for the day!  Hogan volunteered that they only had one bite on a skipjack in the two days – “It was a one strike/one fish,” he grinned.

As he had done the year before with a young boy in the crowd, Hogan motioned to the mother of a young girl in the throng of spectators, inviting her young daughter to join him for a photograph with his prize. He explained that he felt it was important to introduce local children to the fishing opportunities that exist.

There were still a few challengers on their way in … all hoping that their catch would be a contender. The boat Sea Boy with Team PXP, angler Juan Baraym, arrived next with a 218-pound yellowfin tuna only to discover that his fish came up a few pounds short of displacing the leader.

In the Billfish Category, Team Second Wind with local angler Ryan Donavan, Redrum Sportfishing, (with a home team advantage) had a 404-pound black marlin on the Sea Wind which failed to find a place on the leader board as well. However, the smaller size didn’t curb his enthusiasm.  “I’m stoked on the momentum Team Second Wind has going,” he commented.  “This black did come in a little smaller than a few others at 404 pounds, but in addition to this one, our team weighed in a 200-, a 300- and a 400-pound class fish now!”  He does have bragging rights for landing qualifiers in the last two local tournaments, and in addition there is still the Black and Blue coming up.  Maybe these are just his practice fish?

Capitan Greg Distefano, aboard the El Suertudo, faced a dilemma. His angler Azam Flores hooked a blue marlin that had become body wrapped; he dogged it for nearly three hours before it was brought to the surface. He elected to keep the fish because of its condition after the extended fight; he tried to revive it but was unable to. The fish weighed 361-pounds but was not in contention in any of the categories. Keeping the fish cost him First Place.

Had he released the fish, he would have taken the top prize in the Release Division amounting to approximately $50,000; instead, he placed Third.

Although not filled with the most bountiful of fish, this tournament has certainly had enough excitement, competition and challenges to keep the event interesting. Now as we get ready to celebrate the life of its founder, Bob Bisbee, it’s only fitting that there is a bit of horse play (fish play?) that kept this LCO interesting … just as it should be.  For Bob. As we give him a sendoff.

Everyone whose life was touched by Bob should join us at the Baja Cantina at 1:00 p.m. on Monday, October 22.  He would want you to be included.

And by the way, the results of the tournament will be announced at the Awards Banquet at Maria Corona’s on Sunday night.

For the latest in final standing visit https://bisbees.catchstat.com/Tournament/TournamentCategoryPayouts