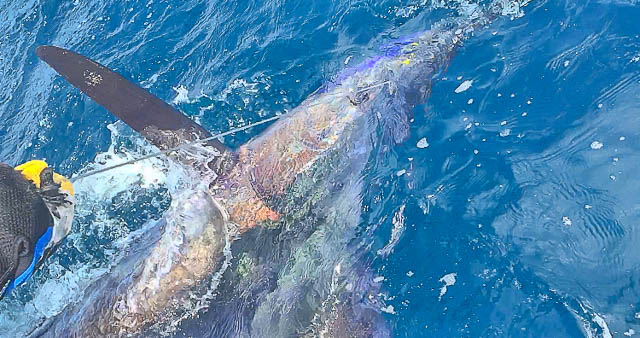 There were a remarkable number of sportfishers anchored in front of the well-known Hotel Buenavista Beach Resort on Tuesday and their teams filtered in all afternoon to register for the ECO much to the delight of Tricia Bisbee, David Garcia, John Garcia, Jake Pavlu and Carey Bisbee, all part of the registration staff.

Throughout the afternoon was a steady, but not overwhelming, stream of participants wandering through the hotel’s large dining room which was decorated with mounts of the marlin, dorado and yellowfin tuna, reminders of the targets of the teams for the next three-days of fishing.  Many were subdued somewhat, perhaps in unconscious deference to the recent loss of their patriarch, Bob Bisbee.

Team Awesome, a sponsor and competitor for many years, displayed the following on their team shirts:

touch our fish and honor his legacy"

There was still electricity in the room as it buzzed with excitement and teams exchanged greetings or introductions. Of course, most were chatting in generalities about what they had seen in their travels as some had pre-fished before arriving -- sort of a casual jousting for information.

While the positives outweighed the negatives, overall the most common complaint was how hot the sea temps were -- some areas reaching the high 80s. It seemed likely many had seen fish as frequent comments were overheard regarding mostly non-qualifying (300-pound minimums) being spotted; in some cases, a few actually shared cell-phone photos.

Baja Mark, owner of Baja Mark’s Fishing Tackle in La Paz, while busy selling teams last minute tackle needs, lamented the fact that he was going to miss competing this year as his own boat was out of service. “It’s going to be a good year; there’s lots of fish and this is a great tournament,” he said.

Countering that claim Captain Horace Barge, Team Reel Energy, said glumly, “We’ve been pre-fishing for several days and never saw a fish behind the boat, but that’s good, as it’s better to see ‘em during the tournament.”

Hi-Five Lures, Ken Matney, an exhibitor at ECO since 2004, had tables stacked with lures. Some of his latest creations were boasting a much lighter design in many ultra-violet colors that seemed to catch the eye of the teams that stopped by.

Matt Clifton, Scorpion Sportfishing, commented that he had fished the past seven days.  He shared his delight in the results of a new deep-sea planer he had been experimenting with. Not only was he pleased with the new design, but he was optimistic about the number of fish that would be caught and seemed sure that a qualifier would be brought to the scale.

While several other teams including Team Overtime not only swore by their tried and true approach, they were opposed to experimenting during the competition.

On the other end of the spectrum, there were those who were planning on junk fishing -- using anything and everything until something works.

A comment heard often was similar to the one made by Mark Rayor, Jen Wren Sportfishing: “There are more, large sportfishing yachts than I have ever seen in this tournament before. They’re catching on to how great this event is!”

During the Team Meeting later in the afternoon, Wayne Bisbee began. “This event is shaping up to be a killer! Although we have 62 teams, the total money is up from last year … it’s just north of $650,000!”

Continuing, “But before I get into that, speaking for my family, we want to give each and every one of you a very, very, huge THANK YOU!”

“I gotta’ say, that literally five days in, we were going through the emails, notes, and Facebook messages and were overwhelmed with your comments regarding Dad. It was such a positive experience for us and we appreciated your reaching out to us. You guys are great!”

“On behalf of myself, Tricia, Mom and the rest of the whole family we want to express our sincerest gratitude. I can’t thank all of you enough!”

After reviewing the rules (click here) and before thanking the sponsors, (click here), Bisbee and Clicerio Mercado raffled off a variety of sponsor items that had been donated; Bisbee announced that Tequila Revolucion was providing free shots for all the teams and guests who were interested, and then he closed, wishing everyone good luck during the event.