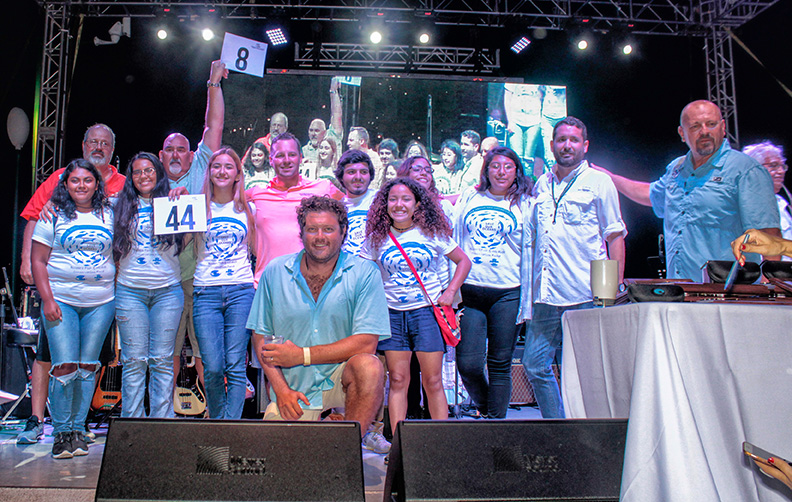 Incredible auctions and raffles for great causes, topped off with a concert by six original rock star legends whose 70’s and 80’s hit songs shaped our lives!

Nearly 800 anglers and guests joined in a remarkable demonstration of support of the Bisbee’s Fish & Wildlife Conservation Fund’s first-ever charity event benefiting the projects that were at the heart of the organization when it was established nearly five years ago.  The event was open to the public.

The Bisbee’s Fish & Wildlife Conservation Fund, partnered with the Green Scholarship Program and La Paz University, awards 4-year Marine Biology scholarships to selected students who are underprivileged, yet have excelled in their studies and demonstrate a passion for higher education.

Wayne Bisbee stated, in part, “… We are thrilled about this great opportunity to financially assist students, who, due to their economic circumstances had virtually no chance for obtaining a higher education degree, launching careers that will allow them to protect the marine resources that are part of the sport fishing fabric of Baja and beyond. We are gratified with the results thus far and want to continue to substantially increase the amount of scholarships awarded to cover education tuition expenses in the future.”

The epic event was held on the cruise ship pier in the middle of IGY Marina where guests were dined by the main sponsor, Baja Cantina, and treated to a unique mix of a live auction, entertainment, and a top-tier firework show following the exciting awards ceremony.  Over $3,255,750 was distributed to various category winners of the three-day 2017 Bisbee’s Black & Blue Tournament.

The charity auction and elaborate raffle program was built and implemented by the Bisbee’s Fundraising Manager, Natalie Radzwilla, who is also the co-owner of New World Public Relations. With the help of renowned auctioneering veteran, Andy Dunning of Dallas Car Sharks, they were able to raise almost $200,000 for the Bisbee’s Fish and Wildlife Conservation Fund and its beneficiaries.

When the final item was awarded to the highest bidder, Wayne Bisbee introduced this year’s 4-year scholarship recipients from the Bisbee’s Conservation Fund. Thirteen of the recipients were honored on stage and given a standing ovation from the audience.

Bisbee closed, adding that the next conservation event will benefit their revolutionary billfish tech-tag program. It will be held in early 2018.

Then it was time to party. Who better than David Pack's "Legends Live" to get the party underway?  When “Legends Live” took the stage, all rose to their feet and danced in the aisles to the music of some of the greatest voices and songs in rock history, all on the same stage! These 70’s and 80’s superstars included::

Wally Palmar (lead singer of THE ROMANTICS) - singing “What I like about You”, “Talking in your Sleep” and more;

Jim Peterik (founder/singer of IDES OF MARCH, also formerly of Survivor, .38 Special) - singing “Eye of the Tiger”, “Hold on Loosely”, “Vehicle” and more;

Dave Jenkins (lead singer of PABLO CRUISE) - singing “What cha’ Gonna Do?”, “Love will find a Way” and more;

David Pack (former lead vocalist of AMBROSIA) - singing “Biggest Part of Me”, “You're the only Woman” and more.