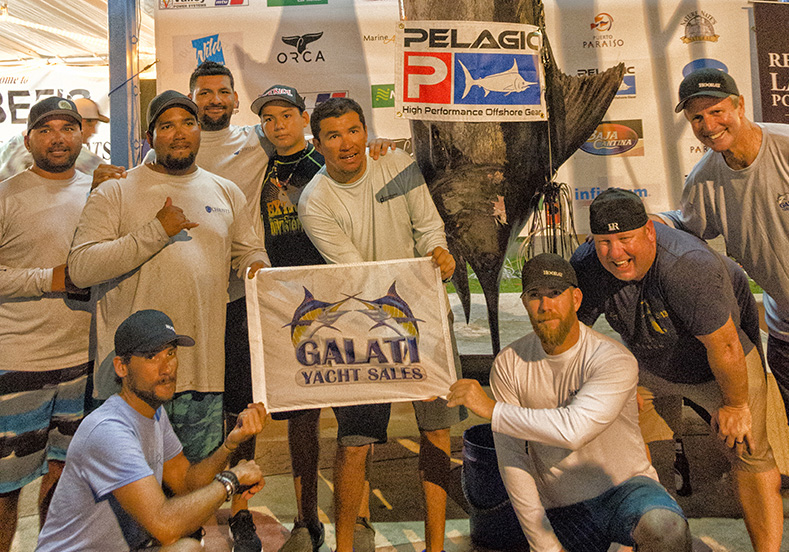 The second and final day dawned with an unusually, beautiful sunrise … a brilliant fiery globe seemingly smushed briefly by a single band of clouds. When the final flare of the tournament gun was fired, the fleet hesitated for only a moment before splitting off in different directions toward either the Pacific or the Sea of Cortez.

Team Hooray’s Captain Francisco (Pancho) Bojorquez headed for the Gordo Bank and was rewarded with an early bite. Angler Kenneth Padgett had his blue marlin in the boat in less than an hour … actually 52 minutes.

Meanwhile Axel Valdez at Tournament Control stayed busy fielding a flurry of hookups and subsequent reports of boated fish which included blues and blacks in the billfish division, plus both yellowfin tuna and dorado in the gamefish division. He cautioned the Weigh Station crew to expect to get jammed up when the scales opened at 3 p.m. and he was right on the money!

John Martin aboard the Wild Catter with his 358-pound blue marlin was the first qualifier, and his fish led what would be a steady parade of boats throughout the afternoon.

By early evening, the list of weighed fish had reached two tuna and six billfish, including a few “Hail Mary’s” that didn’t qualify. Team El Torito on Gladiator arrived with angler Antonio Rohero to weigh in his 362-pound black marlin. Rohero was fresh from his win in the Tuna Division in the LCBT with a 214-pounder.

Several teams were still reported hooked-up after sunset and the staff waited those final several hours that passed by slowly with occasional updates confirming that Team Hooray was still fighting their fish that had been hooked up since 4:45 p.m.

The spectators milled about the Puerto Paraiso Mall, checking out the booths of the different sponsors. The rumor of an impending larger fish drew a continuing growing crowd.

Finally, just before the Weigh Station was closing, a cell phone call from “Pancho” confirmed that the “Hooray” had boated their fish.  They raced against the clock at 40-knots to make it inside the IGY Marina on time.

As the 80’ Viking spun as it backed into the slip, a crowd of several hundred had lined the pier and dock to get a glimpse of the monster fish lying on the deck. The boat lines were thrown to the dock by the crew and the cheers of the crowd were deafening. As soon as they stepped off the dock, the jubilant crew and anglers hugged and hi-fived one another. It was only then that many realized the team had landed not one, but two, large blue marlin.

After the half-dozen husky men wrestled the two fish out of the boat and on to carts and pushed them up the ramp to the top of the dock, the entire, triumphant Hooray crew marched in procession as they chanted “Hooray for Pancho” over and over.

Pandemonium broke out at the scale as spectators, photographers and staff all jostled for a better view of the fish. When the fish had settled on the scale, with gusto, weighmaster Jack Teschel bellowed out the weight at 574-pounds, verifying that this “Hail Mary” turned out to be the largest fish of the 2017 Bisbee Los Cabos Offshore Tournament. Angler Tom Powell, Charleston, S.C., had also landed the largest fish of his life and had taken 3.5 hours to land it (which also happens to be the longest time he had ever fought any fish). Angler Kenneth Padgett’s blue marlin, also taken on the Hooray that day weighed 315 pounds. “Hooray for Pancho”!

A “Hail Mary” in the final minutes of the of the 2017 Bisbee's Los Cabos Offshore Tournament allowed Team Hooray to land the heaviest fish of the tournament, a 574-pound Blue Marlin. A huge congratulations goes out to the Hooray Ranch team! And a big thank you to the Liperts of Hope for Los Cabos who estimated that fish would be 1,700 meals for families in Los Cabos!