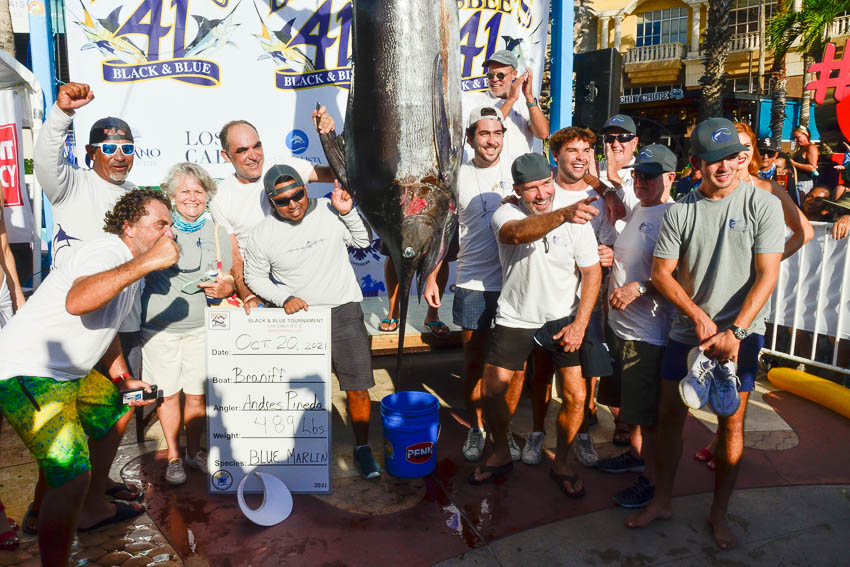 After nearly a month of great fishing, stormy conditions caused fishing to be quite challenging when the aftermath of Hurricane "Pamela" came within 50 to 100 miles of the tip after first threatening Los Cabos then veering east toward mainland Mexico.

Boats that did well on Sunday, October 17, preceding Day One of the Bisbee Black and Blue on Wednesday, the 20th, were kept off the water on Monday and Tuesday when the Los Cabos Port Captain closed the Port. 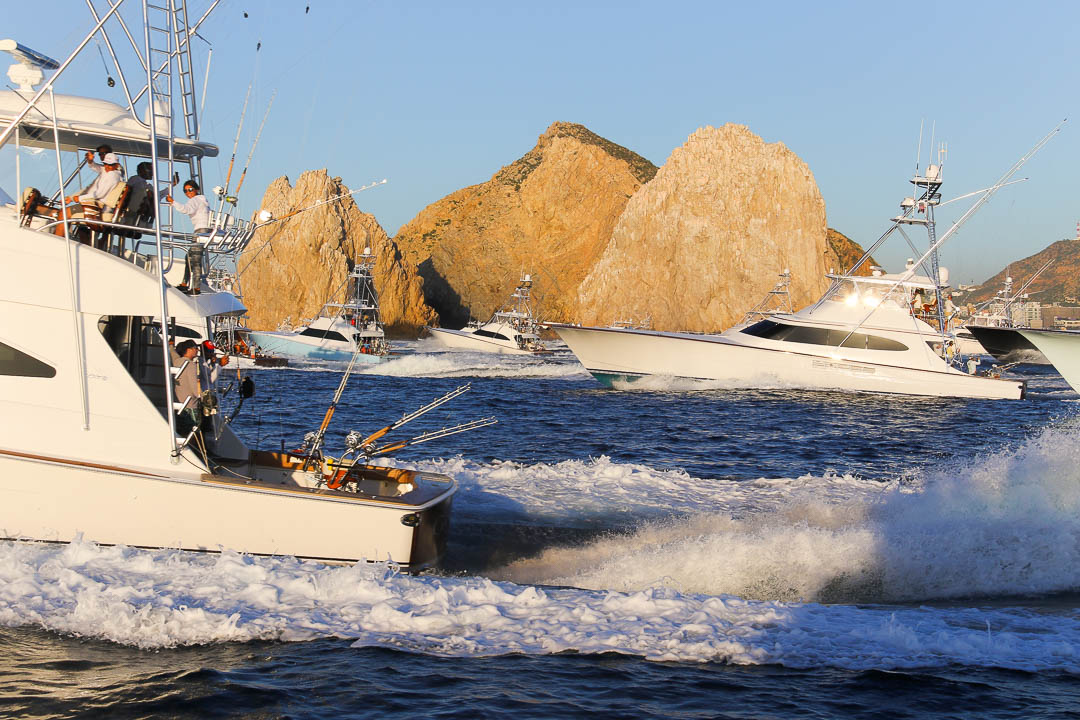 As Bisbee Black and Blue Day One began, many boats raced back to the hot spots from the previous weeks. But, unfortunately, they found that the water temps had dropped, and the currents were powerful and fast-moving.

By the end of Day One, CatchStat reflected that there had only been 16 reported events for the entire day, of which only one qualifier was brought to the scale.

For the 20th time in the 41-year history of the BLACK and BLUE, a ONE MILLION DOLLAR check was presented to the tournament winner!

Team BRANIFF, a FIRST-TIME WINNER aboard a Pisces Fleet boat, the 58' Dona Homa, with Captain Lupe at the wheel and angler Andres Pineda on the rod, caught what turned out to be the largest fish weighed in during the event – a 489-pound blue marlin earning the TEAM over $1,000,000.

According to Marco Ehrenberg of Pisces Sportfishing, Andres came to Cabo in 1998 when the Base Entry was a mere $8,000.  According to Ehrenberg, Team BRANIFF always fish as a team, and all have a boat somewhere in Mexico, Cancun, Vallarta, and Vera Cruz and fish and compete in many places.

On Day Two, there were 23 reports of hookups or releases to Radio Central, but nothing boated.

"Every hurricane that passes through has a different effect on the fish. This last one took the Black Marlin entirely out of the equation!"…Captain Steve Lassley 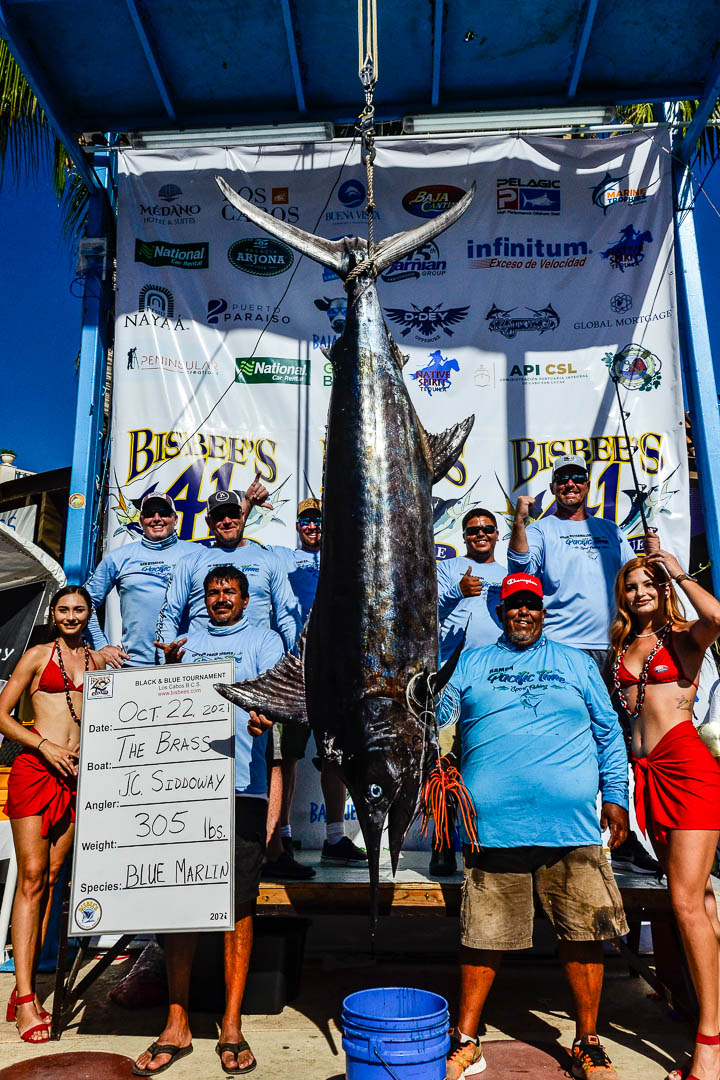 As JC Siddoway waited for his blue marlin to be weighed, TV Host,Todd Harris asked, "What do you think of the tournament?" Siddoway shook his head and murmured, "INCREDIBLE!" Todd continued. "What's the chance that a bunch of farm boys would come down to fish the Bisbee and win the Black and Blue with a 305 -pound blue marlin?"

Siddoway continued, "I gotta' say it must have been pretty damn good. It's the biggest fish I have ever caught. So it was meant to be. I usually come down in January and fish for stripers that are small by comparison. This one fought hard!  It took nearly 2-½ hours to get it to the side of the boat."

"We are a bunch of ranchers and one insurance guy; even if we didn't get the money, the tournament has been awesome!"

Cade Carter, angler: "Several years ago, I came down here and found Captain Paulo and his deckhand.  They always put us on the right spot at the right time. We enjoy fishing with this crew, and they come through for us every time!"

"I told the captain that I thought it was a qualifier and to go NOW. Everyone kept looking at it, and I said, 'I think we are good.'"

"It's awesome to win, and I'll be honest with you, we were planning on doing something. Instead, we got the shot, and thank God we got it with one of the best crews in Cabo!" 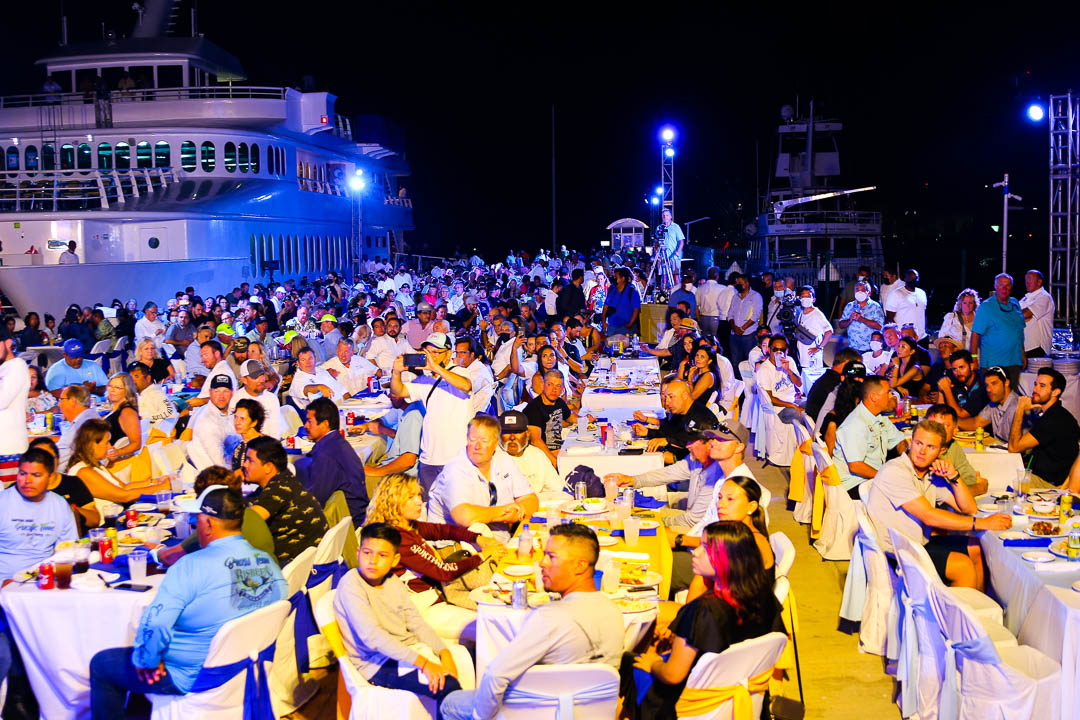 Saturday night's awards banquet was held at the Cruise Ship Pier in Cabo San Lucas. Again, the competing team attendance was remarkable, and it was clear that they weren't going to miss the "party harder" side of the Bisbee Black and Blue equation.

Cabo Max entertained throughout the cocktail hour as Teams enjoyed the opportunity to catch up with other teams and exchange few fish tales.

Jorge González, the owner of Baja Cantina, had an army of wait staff on hand to make sure the elaborate buffet dinner was served promptly. While Jordyn (Busby) Bisbee, Director of the Bisbee Wildlife Foundation, supervised her raffle ticket squad, as they mingled throughout the large crowd selling raffle tickets and promoting the upcoming auction offering a DAGGABOY SAFARI to dart a rhinoceros. Two trips were ultimatley acutioned off to Eric Brandt, from Baja Jerky and Jeff Massey after very competitive bidding.

Rich Christensen’s, RK Creative Productions, always popular video record was next on the agenda before Bisbee recognized some sponsors attending the party. A complete list of all can be found here.

At last, it was the best part of the evening, the distribution of the winners' checks: 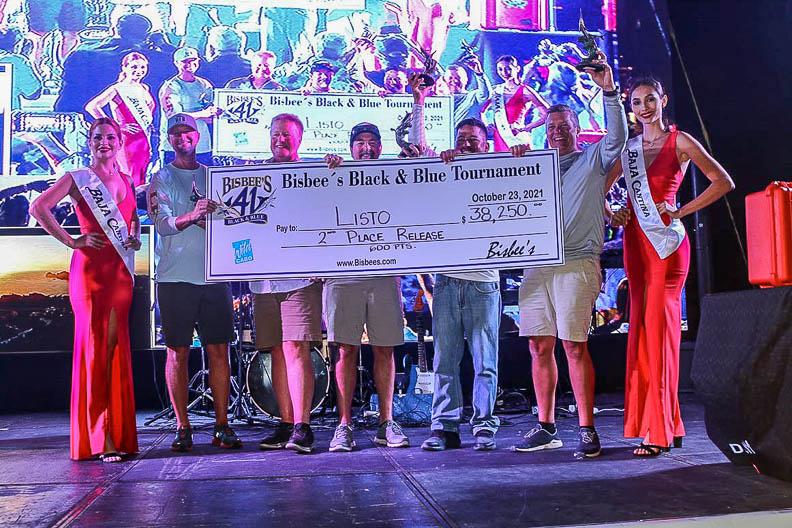 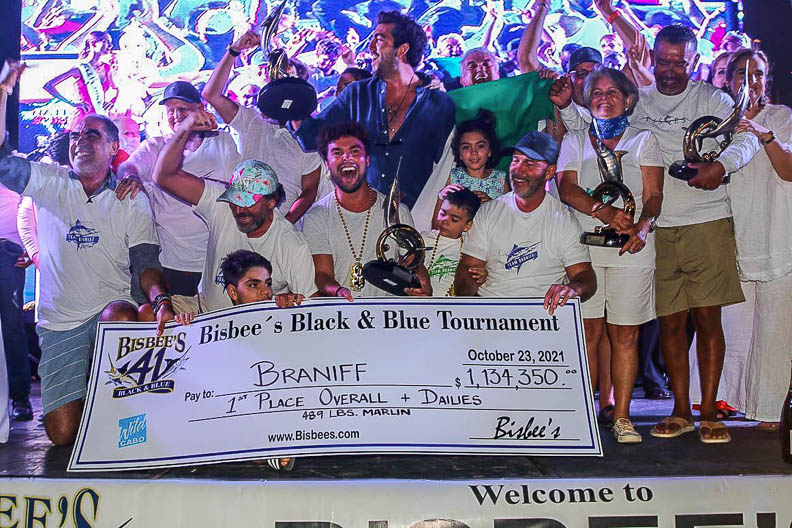