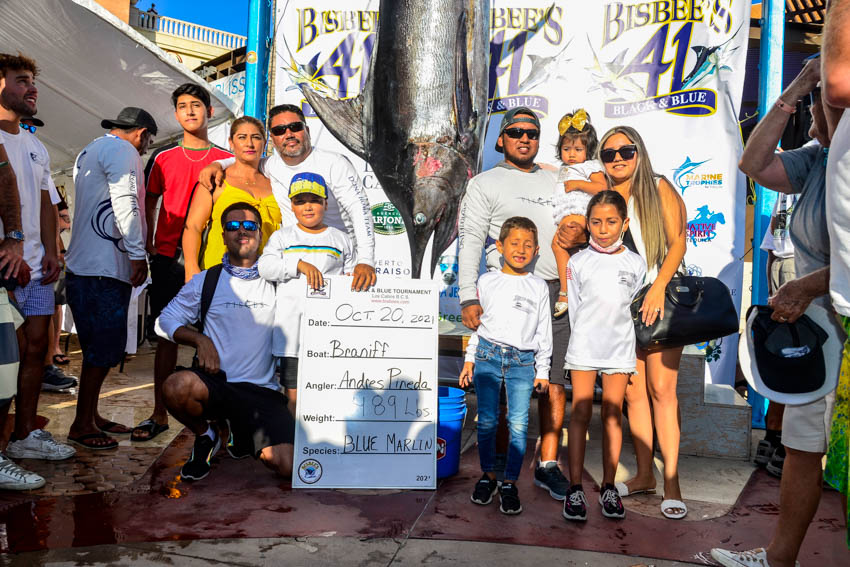 Long before the Bisbee gang swung open the doors for Registration precisely at 3 p.m., for the 2021 Bisbee Black & Blue tournament, the line had already begun to grow.

Those with their paperwork in order, needing no changes, were directed to Jordyn "Busby" Bisbee for rapid check-in. Teams needing to update their entries were required to wait in a line that ultimately stretched out to the weigh-station. 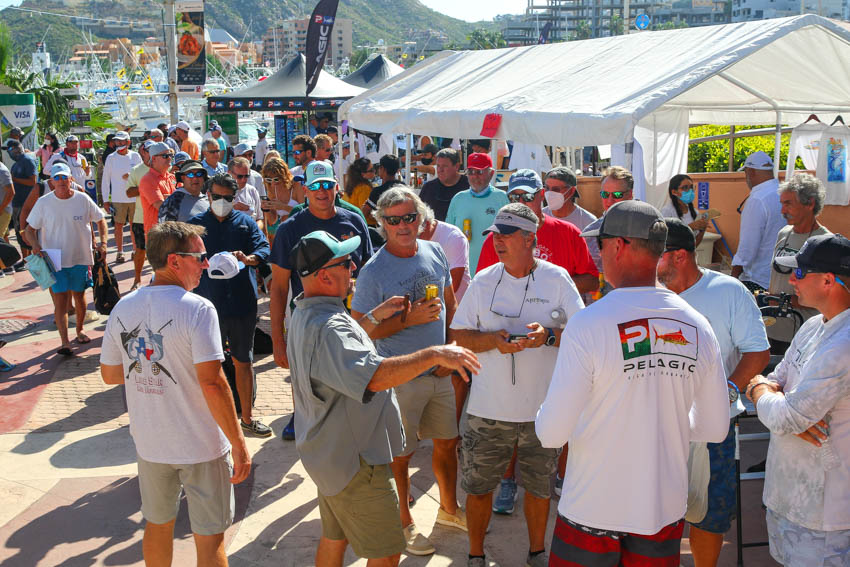 The long line allowed ample time for teams to mingle on the off-chance they might overhear information that someone let slip that would be useful during the three-day tournament.

With drinks to satisfy anyone's taste – water provided by Bisbee Team members,  Pacifico beer flowing, sponsor-provided, ice-cold, PROBALLER ENERGY drinks, and tequila shots from Native Spirit Tequila,  whose owner,  L. J. Wilson is the only woman owner in that industry. Then there was also 100% Pure Blue Agave and Mixed Tequila, Award-Winning Mezcal provided by our sponsors!

Plus, there was hot coffee for those who needed to slow down a tad as the afternoon wore on! 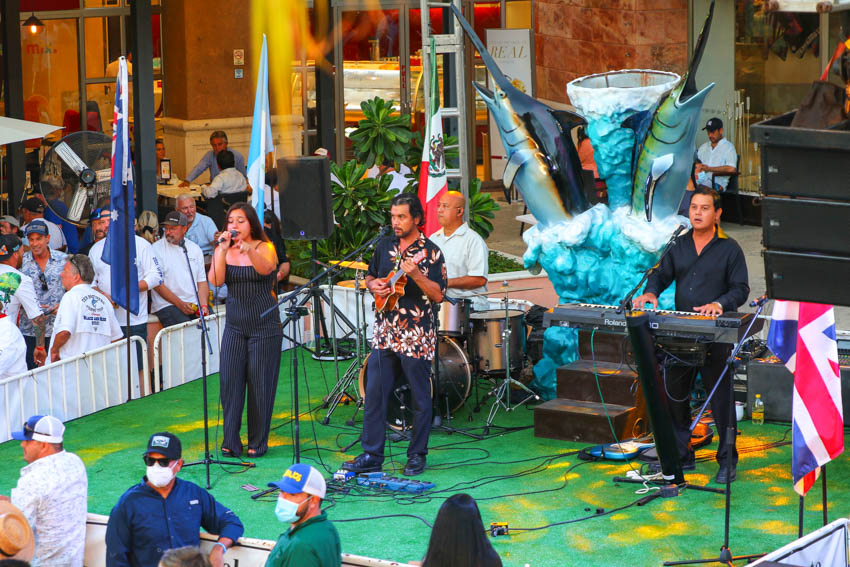 By the time Cabo Max took the stage, the entire crowd was party-ready. Some began dancing to the music on the cement in front of the stage.  And yes, the Registration line still stretched down the Plaza Puerto Paraiso crowded walkway though it continued to dwindle throughout the afternoon while the music played on.

When Wayne Bisbee and Clicerio Mercado took the stage for the Captains' Meeting, the crowd in front of the stage filled the entire walkway as Bisbee went over the rules, which Mercado translated into Spanish. 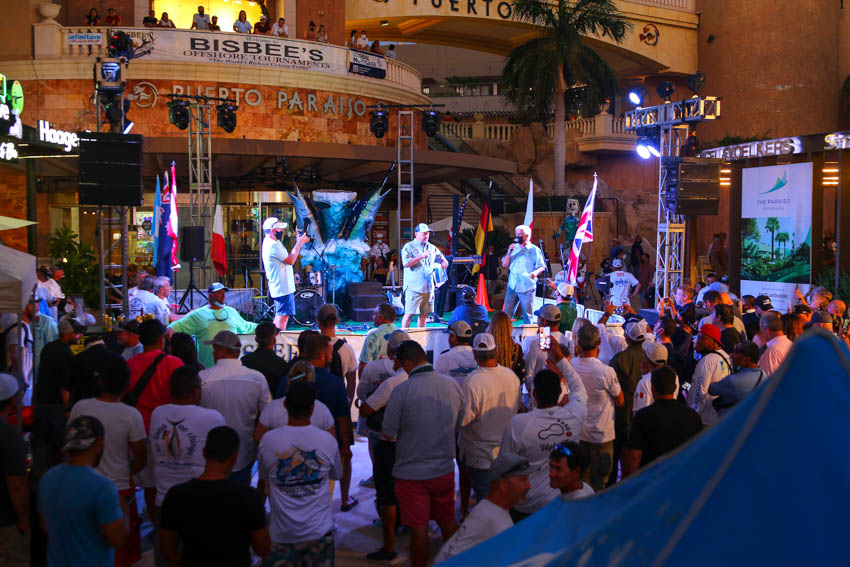 Everyone was waiting for that one announcement – the numbers.  Bisbee finally revealed the status of the Black & Blue.   However, he cautioned that the figures were the unofficial totals and would be confirmed before the start the following day. In 2021 the event has grown to 202 teams competing for over $10,000,000!

The group went wild as he encouraged them to give themselves a big hand. 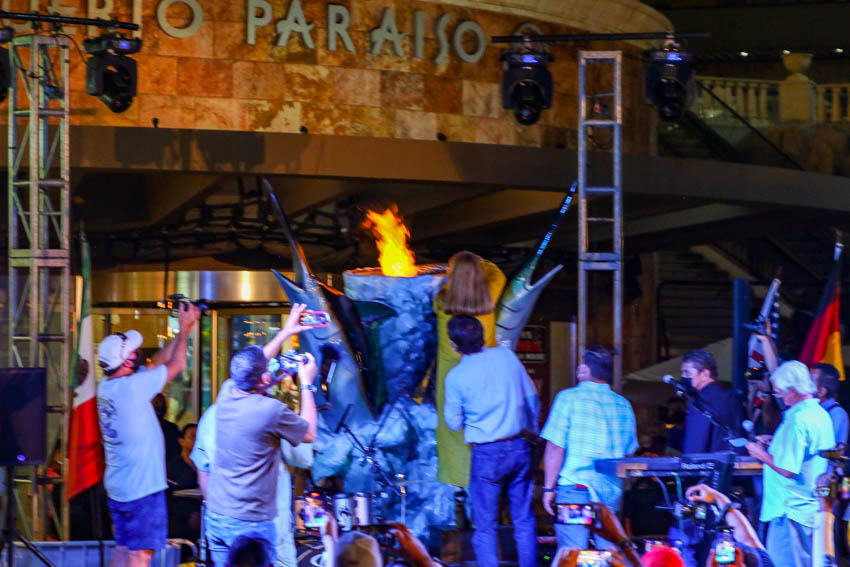 After the traditional Military presentation of the colors, and the playing of the Mexican National Anthem, the local and state dignitaries, including Los Cabos Mayor Oscar Leggs Castro and Cabo San Lucas Mayor Carlos Heliu Najera assisted Maribel Collins, State Secretaria of Turismo, in the lighting of the flame that will continue to burn during the Black & Blue. 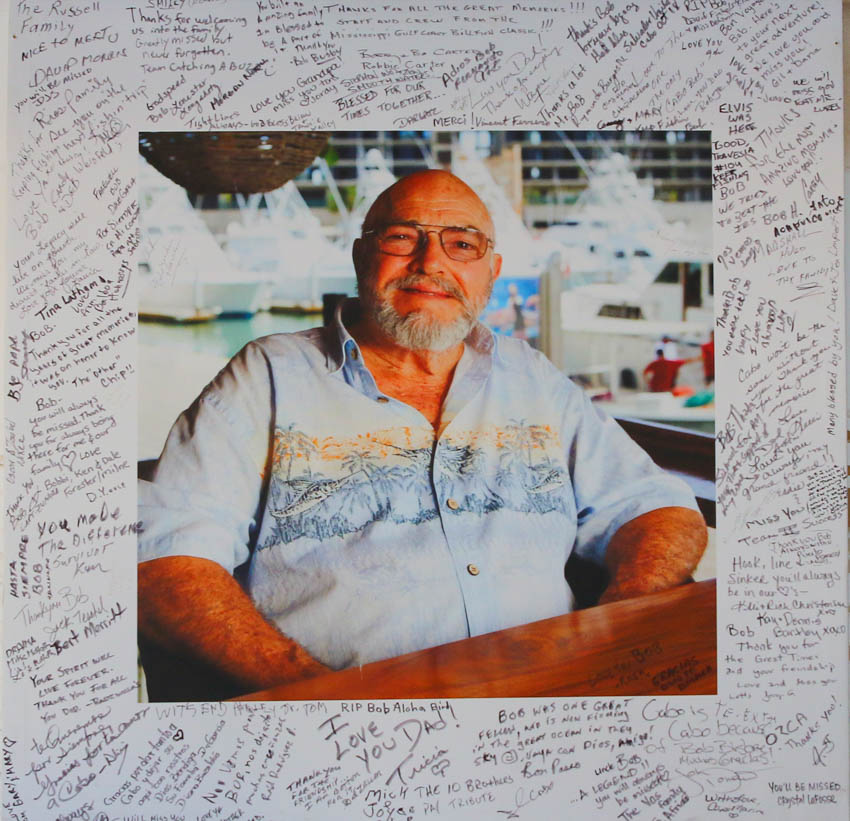 Another B&B tradition of toasting Robert "Bob" Bisbee (1933 – 2018), the patriarch of the Bisbee Clan, was followed by an extraordinary fireworks display. 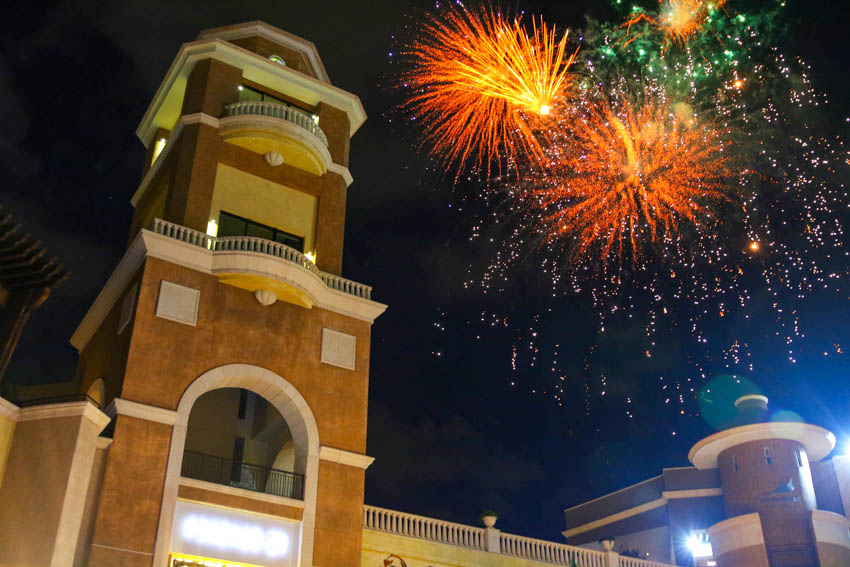 Wednesday morning, the harbor was abuzz as the 202 teams began heading out, some very early to buy or make live bait before the 8 a.m. start.

The massive fleet was as intimidating as it was awesome. It ranged from 22' pangas to 80' tricked-out sport fishers outfitted with more electronics than one could imagine.

Two large spectator boats were required to accommodate dignitaries, press, guests, and the few tourists that were up at the crack of dawn to be in on the fun.

Photo ops abounded on the official start boat Cabo Wave as it worked its way out to the assigned position at the end of the imaginary line nearest Cape Rocks that extended to Gray Rock across the inner bay.

The Queen of the morning, Aina Bisbee (Mrs. Bob Bisbee), the Matriarch of the Bisbee clan, was escorted by her daughter Patricia (Tricia) Bisbee and held court on the top deck of the Cabo Wave. Dignitaries (some newly elected), and old and new friends, all stopped to pay their respects. When Governor Víctor Manuel Castro Cosío stopped by to introduce himself, pausing after his name, Aina's eyes sparkled, and cutting him off before he could continue, she said, "I know, you're the Governor."  Then, with a broad smile, he shook her hand.

The morning flew by for the spectators while eager Teams filled with enthusiasm waited for the start as they crowded the line hoping to find the LARGEST million-dollar billfish that day. 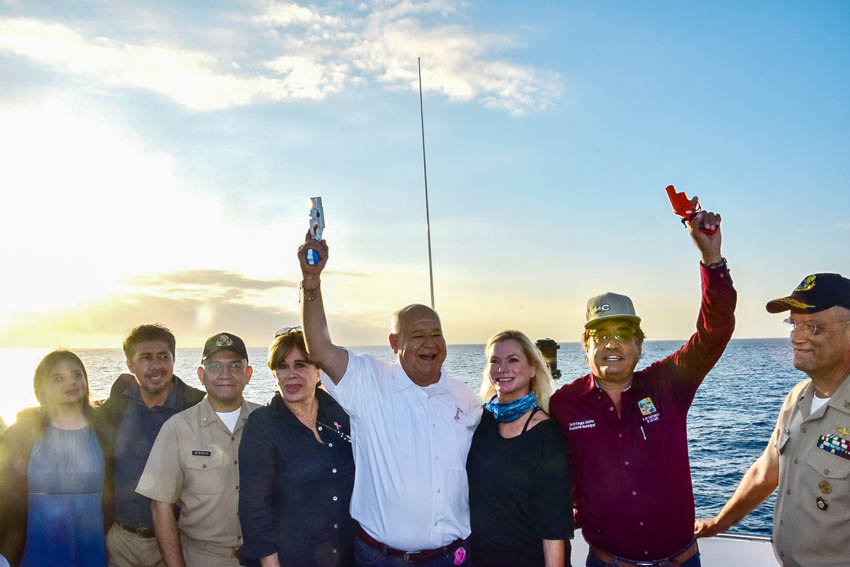 Wayne Bisbee bellowed over the VHF radio as several dignitaries extended their arms outstretched above their heads, 5…4…3…2…1! Then, they fired the red flares into the sky for everyone to see. 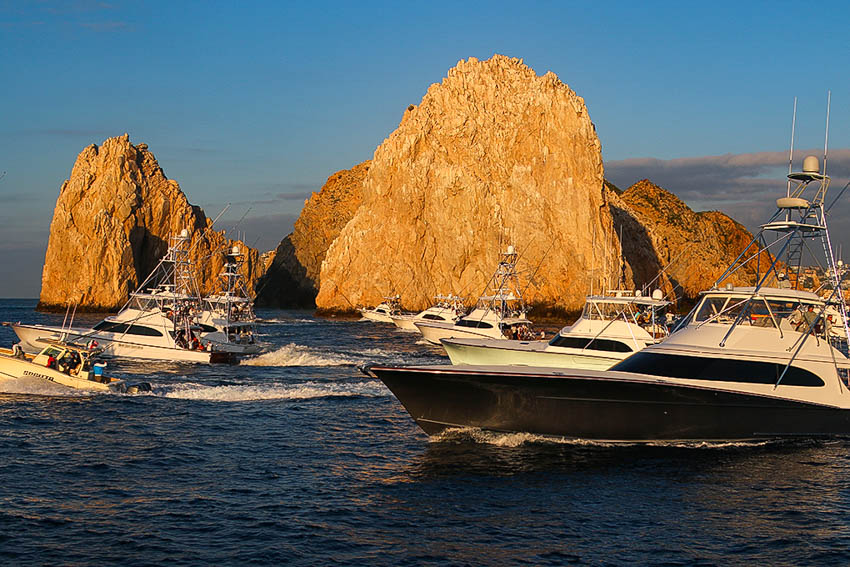 As the hundreds of boats went from idle to full throttle, each Captain pointed the bow toward their hoped-for "hot spot" with high expectations. Bisbee announced the revised count: 2021 Bisbee's Black & Blue Total Payout: $9,824,300. And the team count had dropped to 199.

Throughout the day, the action was sparse, with only 18 events called in according to the Radio Control Team of Axel Valdez, Buena Vista, and Jill Christensen, Frisco, Texas.

The boats had released nine billfish on Day One and had caught a few small gamefish.

Team BRANIFF was fishing aboard Pisces Sportfishing Fleet's, Dona-Homa, a 58' Rivera. Captain Lupe Gomez was the skipper, and Angler Andres Pineda hooked his fish about 2:30 p.m. After an intense battle, he landed it at 3:46:00 p.m., according to CatchStat. The fish hit on a green lure made especially for him by Eric Coyanagui. Captain was sure they had a qualifier when he watched it greyhound away from the boat.

Andres fought the fish just over an hour before the Team could wrestle the monster into the boat. They must have had high expectations, as they sure had ample bodies on the Team to get the job done. 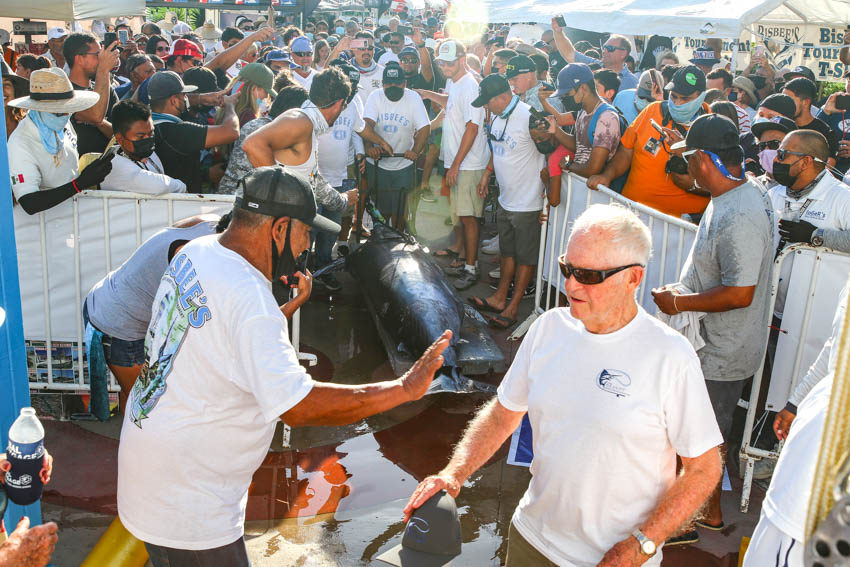 Talk about pumped!  While they began turning and backing the big sportfisher to the dock, they were hollering, "Show us some love!" and "Viva Mexico!" at the top of their lungs.  At least a three-deep crowd at the rail watching the unloading of the fat blue marlin on its final journey to the scale joined in their celebration.

In addition, it was pandemonium personified as the mass of spectators barely parted so the giant fish could be weighed. Finally, for only the second time this season in Cabo, Jack Teschel bellowed the weight of the fish, FOUR HUNDRED EIGHTY-NINE POUNDS.

The qualifying fish resulted in the new Carey Bisbee innovation this year – a curtain of sparklers flashing and glistening between the fish and the crowd, much to the delight of the excited Mexican Team as they hugged and chanted "VIVA MEXICO," which was heard and echoed around the entire plaza.

Wayne Bisbee beamed, "We have a qualifier, thank God. So, I won't have to write 127 refund checks this year!"

Reporters, photographers, videographers, and spectators descended on Team BRANIFF  like flies on a sugar cube. With questions, congratulations, and directions, as well as a "look this way," "over here," as professional and amateur paparazzi tried to get that money shot. 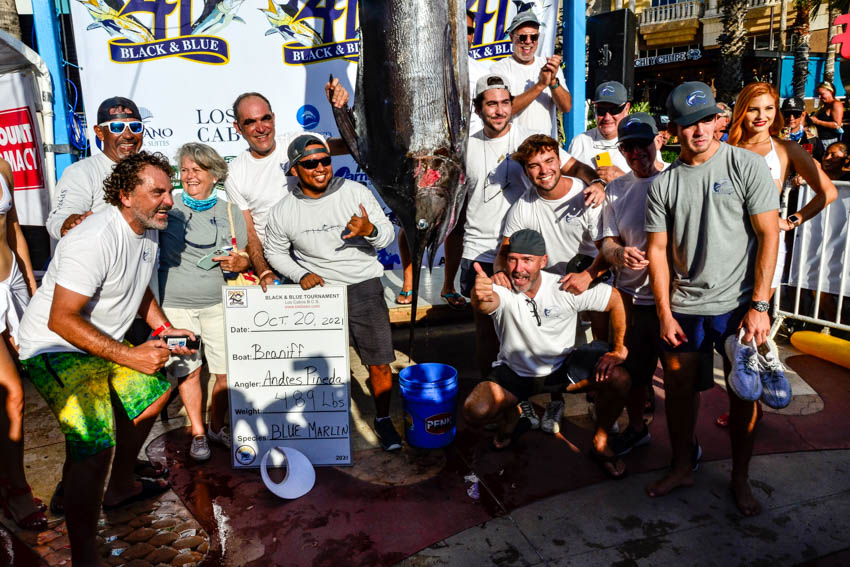 Bisbee announced that Team BRANIFF's catch was worth just over $600,000 since they only entered the $500 and $5,000 Daily Jackpots; however, there is still a possibility of more money if theirs remains the largest fish brought to the weigh-station!

The celebration continued as Bisbee wrapped up, when the clock reached 5 p.m., confirming that "lines out" and that no other fish were hooked up or coming to the scale. So, his announcement caused yet another brief celebration before the Team departed for a well-earned dinner at one of their favorite restaurants.

Brian Solomon, the owner of the popular Solomon's Restaurant on the Malecon surrounding the marina, added, "Today was the first day of the Bisbee's Marlin tournament, the cash richest in the world with $10,000,000 in cash on the line!  It's a three-day tournament, and I gave my Captain the day off from working my boat so he could fish the event since I was not going to fish.  And today, they won first place with over $600,000 for the jackpots they entered! So happy for him, WOW!!!"

"It was so much his dream! And it came true! So much love when that happens! Congrats, Carlos Chignon!!!”

Once again, the Bisbee Black & Blue changes the lives of team members – in this case, "Team Braniff" will remember this day for the rest of their lives.   They will be celebrated by strangers who retell their story over and over for years to come.

CONGRATULATIONS, TEAM BRANIFF!  May your success propel each of you to new heights!

To the rest of the Teams: as the fleet roars off beneath the red flare streaking across the sky for the second day of the Bisbee Black & Blue Tournament, take heart from the motivation that their success offers. Will today be your lucky day?

*Photo credit for Jonathan Matheu for the  Flare gun start