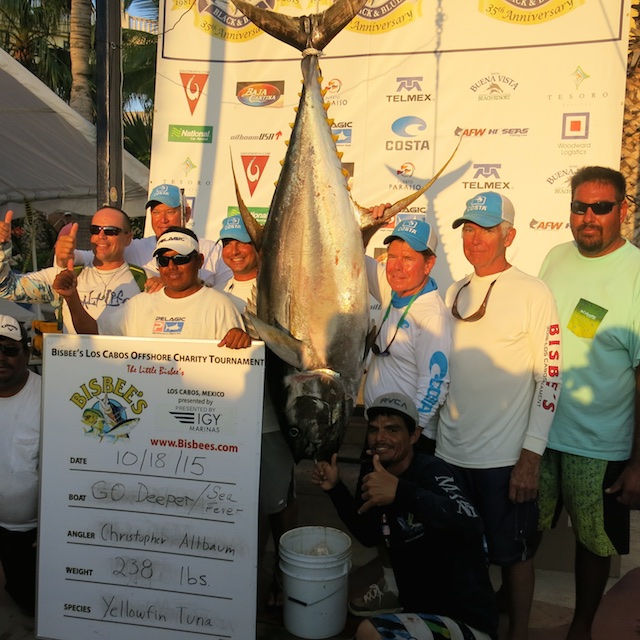 Christopher Altbaum picked the perfect time to catch his largest tuna ever. The Go Deeper/Sea Fever team member outlasted a hefty 238-pound yellowfin to claim the top daily honors in the second and last day of fishing in the 2015 Bisbee’s Los Cabos Offshore Tournament.

“The fight wasn’t that long but it felt like all day,” a tired Altbaum said afterwards. “The guys were all hollering at me, giving instructions. I had a lot of positive reinforcement. Basically it was one boxer in a slugfest with nine coaches cheering me on.”

The big tuna hit moments after the live caballito bait was put in the water near the Jaime Bank. Altbaum was using a Penn International 50 reel loaded with 100-pound line and a 300-pound fluorocarbon leader with a circle hook.

Tuna were definitely the focal point Sunday. In addition to Go Deeper’s fish, four others were weighed yesterday afternoon. Mike Hayes on Salsa got the party started with a 99.1-pounder. Dave Christman on Geri Lynn quickly topped that by putting a 139.8-pound yellowfin on the scoreboard.

Mike Timon on Knot Workin’ whipped his 161.5-pound specimen after a fight lasting an hour and 15 minutes. His first-place hold was short-lived, however, when Brad Erickson on El Burro III hoisted his entry aloft a few minutes later. It would register 167.8 pounds, but Go Deeper would later top that. In the game fish divisions, only the largest fish of each day wins. No dorado were weighed on Sunday and two blue marlin came to the scales but neither were close to the 300-pound minimum to qualify.

Although his tuna was knocked out, Christman had the strangest fish tale to tell. After hooking up and a normal start to his fight, a free-swimming thresher shark trailing a large wad of fishing line became entangled in the line connected to the tuna. Although he said it nearly killed him, Christman was able to wind both fish in without breaking the line. The thresher was cut loose and the tuna was finally boated.