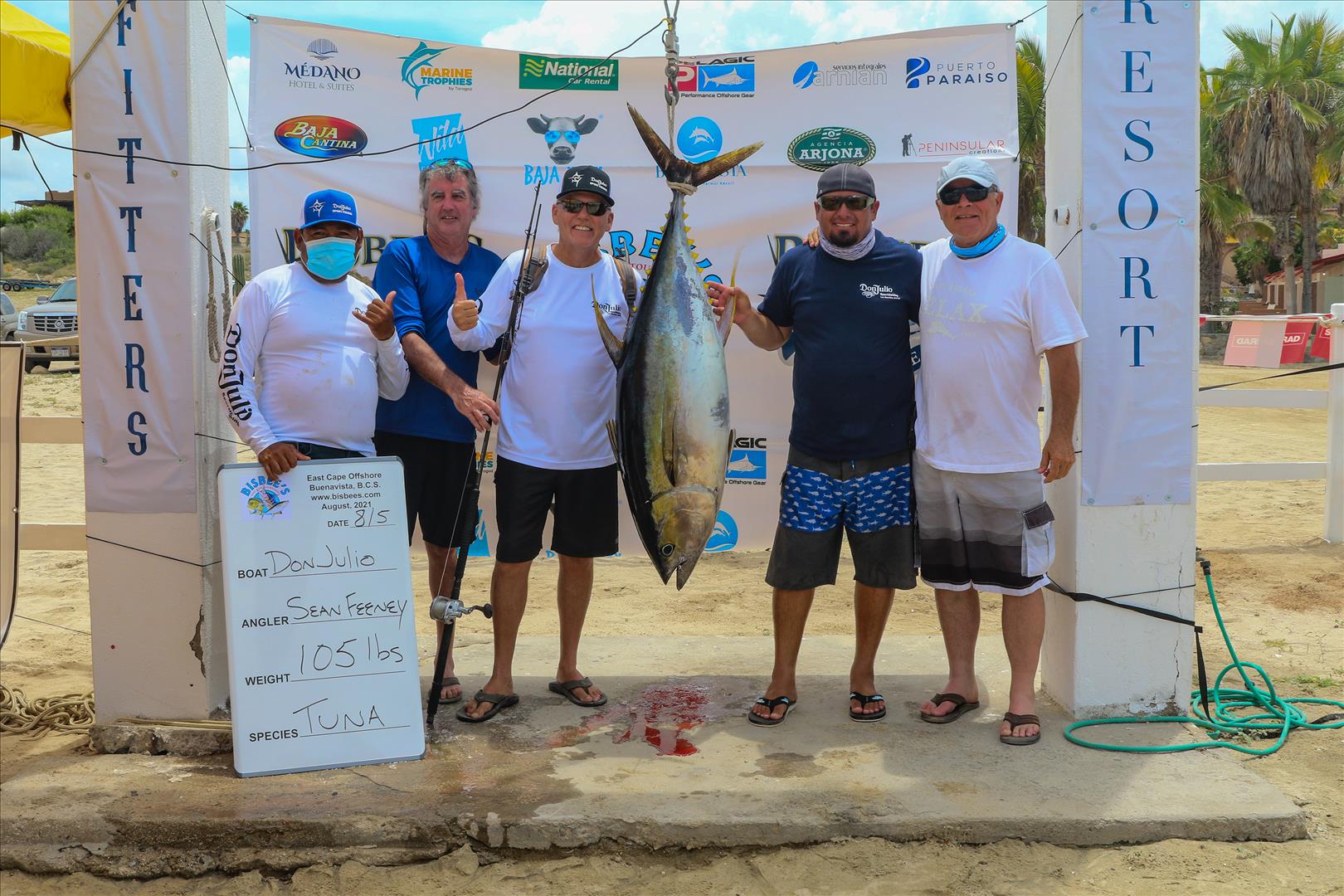 Team One Life angler Ruben Seemann Flores kicked off Day Two with a white-water, black-smoke start by releasing the first striped marlin of the day, followed by several other release contenders within the hour. Angler Bruce McDonald on “El Suertudo” came next, trailed by “Don Julio” with angler Sean Feeney who was just getting started when he released a striped marlin.

Team “El Suertudo’s” Captain Greg Distefano reported that owner Guy Yocum released a striped marlin which kept them in the hunt for the Release Division.

Not to be outdone, Captain Tony Araiza and Martha Warlaumont, owner of the boat “Retriever,” released a striped marlin which ultimatley moved their number to a seven-fish-flurry for “Team Retriever” to the top of the Release Category for Day Two.

It was midday before the first blue marlin of the East Cape Offshore arrived at the scale. Team “Keep It Reel” aboard the “Alegeia” were no strangers to the Weigh Station. They had boated the first fish 0n Day One – a dorado –  caught by angler Scott W. Kays mid-morning. They were the first to the scales with that qualifying fish which put the team in First Place in the Dorado Division until the afternoon when they were pushed off the leaderboard by angler Gernot Wober of Team “Rancheras Guapas” with a 39.2-pound dorado.

This time they arrived with a blue marlin that they hoped would meet the 300-pound minimum.

As usual, the spectators kibbitzed. “It’s not going to make it,” several commented as team members fidgeted while the Weigh Station crew did its thing. Finally, paperwork in order, the enormous blue marlin was hoisted up on the scale after angler Adalberto Cota stood mesmerized at the scale numbers as it zeroed. The silence was deafening when the scale settled before Tricia Bisbee bellowed three hundred and five pounds!  Bisbee Team Members, spectators, and “Keep It Reel” members cheered. As they watched, they understood how precarious that five-pound cushion was. It was going to be a long afternoon until the Weigh scales finally closed at 7:30-p.m.

Meanwhile, the daily “Dorado Parade” began when Larry MacKenzie boated a dorado. When brought to the scale, the next one weighed in at 36.9-pounds, displacing Team “TMAC EASTCAPE,” angler Christopher Engels, with his dorado weighing in at 30.7-pounds.

Team “Veta” arrived with the final dorado of the day!  There was no doubt that this dorado eliminated the day’s competition.  Led by Jose Martin Talamantes, their catch weighed a whopping 43.3-pound dorado, earning them $34,425.

In the Tuna Division, the only tuna brought to the scale was by Team “Don Julio,” by Sean Feeney, from La Costa, Calif., who also has a vacation home at Ranch Leonero. Often a participant in other local tournaments in the area, including the Las Palmas Dorado Shootout that his Team has won in the past, Team “Don Julio” will receive a total of $34,425. for their efforts.

The entire Team “Keep It Reel” after a long stressful afternoon waited. When the “lines out” was declared at 4:30 they gleefully hugged one another. However, could there possibly be a Team out of radio range with a larger billfish out there somewher? The clock continued tick tock, tick tock until finally 7:30 pm arrived. “Keep It Reel” and angler Adalberto Cota could celebrate that their slim 5-pound lead had held. And the now official win in the billfish devision earning them an unofficial amount of $431,800.00 was a reality.

Will the “locals” be able to maintain their winning ways for Day Three? Or will the “Visiting Teams” show up at the scales on the final day and save face?